The History Of The Morris Minor

William Morris, first knighted and later elevated to the peerage as Lord Nuffield, together with his life-long rival Herbert Austin, was one of the founders of the British motor-industry and of the small car in particular. He brought affordable motoring to millions of people who could not afford to buy a decent reliable car and, as a consequence, had to rely on public transport to get “out and about”.

In 1913 William Morris assembled his first car from “bought out” parts, calling it an “Oxford” (the famous “Bullnose”). In 1925 he produced his first small car, naming it the “Minor”. It was cheap and was introduced in order to counter the phenomenal sales of Herbert Austin’s famous “Seven”. Within a year the “Minor” had captured 51% of the UK market, but with the introduction a new Ford Model “Y” in 1933, the Minor’s share dropped considerably. A new small Morris (called the “Eight”) saved the day, fitted with a new side-valve engine of 918cc. (Successive Morris “Eights” carried the flag for the company until the outbreak of war in 1938). 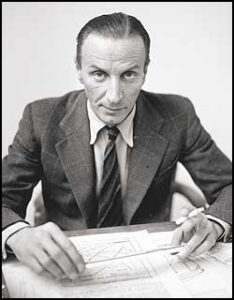 Morris realised that a new small car was urgently needed to continue the company’s progress once peace was declared, so a young, somewhat eccentric, but brilliant engineer, born in Turkey of Greek and German parentage, by the name of Alexander Issigonis, was given a clean sheet to design a new Morris car.

The smallest of the new cars was named the “Mosquito” and was steadily developed throughout the last few years of World War Two. Rough sketches, penned by Issigonis were transformed into metal, prominently displaying the curved designs of the latest cars from across the Atlantic, the Packard in particular. Clearly this car was a total breakaway from the old “Eight”. It now had monocoque construction (doing away with a separate chassis), independent front suspension, 14″ wheels and headlamps mounted low down in the wide radiator grille, all radical departures from the norm

A number of different engines were tried, ranging from a flat-four (Issigonis’s favourite) to overhead camshaft designs. History tells us that at the very last minute one prototype “Mosquito” was literally sawn in half lengthwise on the whim of Issigonis. The two halves were spaced further apart, until at 4 inches wider, the desired profile was achieved. Metal inserts then connected the two halves and it was this widened body that was accepted as the final edition. The name “Mosquito” was dropped and the car was renamed the “Minor” (a recall of the name previously used in 1928). 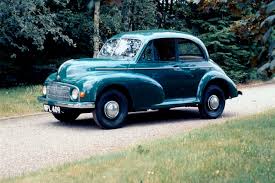 William Morris, cantankerous as ever, voiced his dislike of the new “Minor” by comparing it with a “poached egg”! Morris had been immensely fond of the old “Eight”, which by now was clearly outdated, but he could see no reason for such a radical departure in design. Amazingly, he did not pull the plug, but he did make one major stipulation – the old faithful 918cc side-valve engine, used in the “Eight” since 1933, had to be used in the new car. So, all the various new engine designs unfortunately had to be scrapped!

The car was launched at the Earl’s Court Show in London in October 1948, to be hailed as a major breakthrough in small car design. Two versions were shown – a two-door Saloon and an open Tourer. The cars were extensively tested by the motoring press and praised for their superior road-holding, space utilization and comfort.

After the war, Britain had to export madly to survive and the “Minor” played a major part in its recovery process. Despite its “old” engine, the new “Minor” brought a fresh breath of air to the impoverished and war-ravished British motor industry. Thousands were exported to all corners of the globe to a world hungry for new cars. The British public were only allowed a mere trickle at first, but as more became available, they were able to enjoy the delights of the new “Minor”.

In January 1949 new North American legislation was passed forcing Morris to raise the headlamps into extensions of the front mudguards of all “Minors” exported to the USA. Unsurprisingly, this did not go down well with Issigonis!

In October 1950 the Morris stand at Earls’ Court displayed a new “Minor” saloon, fitted with raised headlamps and boasting four doors. Within a few months all “Minors” were fitted with these headlamps, but not before some 80 000 (so called) “lowlight” Minors had been produced. 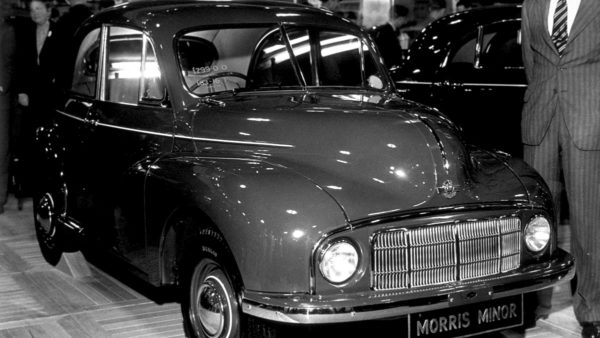 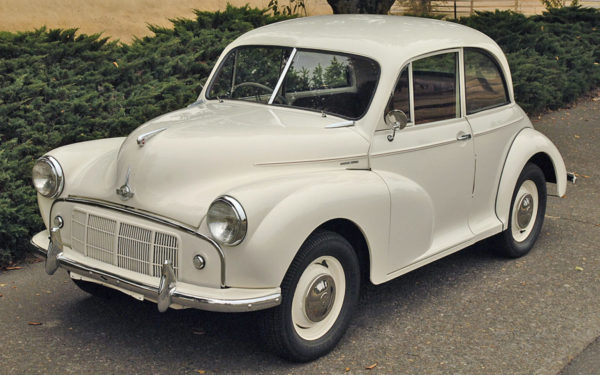 In 1952 the one-time rival manufacturers, Morris and Austin, joined forces and the British Motor Corporation (BMC) was born. At this time, rationalisation caused the demise of the old 918cc Morris side-valve engine, which had done yeoman service since 1933. A newly designed 803cc overhead-valve power-plant and its corresponding gearbox, earmarked for the new Austin A30, was chosen to be fitted into the “Minor”, which was renamed a “Series II”. The new engine was at first only available in four-door saloons, most of which were exported, but by February 1953, all “Minors” were powered by the new engine. Around 176,000 side-valve “Minors” had been produced between 1948 and 1953.

Despite its reduced capacity, the new engine produced more power, but at higher revolutions and, coupled with much lower gearing, endowed the “Minor” with more flexibility, but the top-speed remained at 62 mph.

In May 1953 two new Commercial “Minors” were launched. These were a Pick-Up and a Panel-Van, mechanically similar, but mounted on a separate chassis. These were followed by a Traveller’s car launched in October 1953. This much-loved version had half-timbered body-work at the rear, resembling the “Woody’s”, or Station Wagons being produced in America. These were based mainly on the 2 door saloon, but had ash framework with two opening rear doors (as for a Panel-Van). 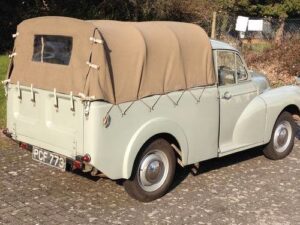 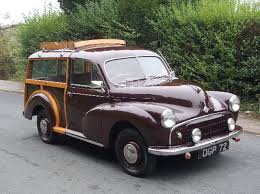 The range continued to sell well, but with the construction of high-speed motorways (autobahns), the “Minor’s” performance was desperately in need of an upgrade. The answer came in September 1956 with the launch of the 948cc “Minor 1000”. Gone was the familiar split-screen windscreen, replaced by a curved one-piece screen. The rear window was much enlarged, but the real improvements came with a larger engine and revised gearing. Gears were changed by means of a short lever between the front seats. Now, at last the “Minor” could hold its own against its competitors and it sold extremely well.

Only detail changes were made during the next six years. The “1000” became the well-loved “pet” of countless families. Bought also by police, armed forces, district nurses, farmers (Pick-ups and Panel Vans), company-representatives and large families (Travellers), the reliable “Minor” in all its forms etched a special place in the affections of most who came into contact with it.

By December 1960, the magic-million production mark was approaching. No British car had ever before achieved a production record of a million basically similar units! To celebrate this unique achievement, one car was prepared in advance. A 2-door “1000” saloon was painted lilac, with white seats and adorned with “1 000 000” badges. Accompanying the release of this special car were an additional 349 replicas (a few in left-hand drive). At the time these special models were not popular (colour perhaps?), but today are highly sought after by collectors!

The final major change came in September 1962, when the engine was increased in size to 1098cc and a baulk-ring synchromesh gearbox was installed. With more power available, the gearing was altered. Now, more than ever, the cars were better suited for use on motorways. Small further improvements were made, but in essence the “Minor” retained all the sterling qualities conceived by Alex Issigonis way back in the early 40’s. Many “Minors” were sent in CKD format for assembly to a number of countries. Prominent amongst these were South Africa, New Zealand, Malaysia, Ireland (Eire), Holland.and Rhodesia. In South Africa, the assembly of these CKD kits took place at the Motor Assemblies Limited plant in Durban. In addition a few hundred “Minors” were assembled at the BMC plant at Blackheath in the Western Cape. (Local South African figures suggest that some 33 333 vehicles were produced at these two plants). 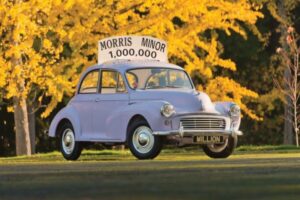 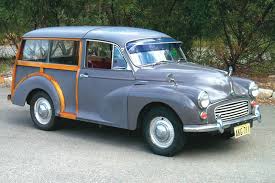 The last “Minor” made was a Traveller, which came off the production lines in 1971. By then, despite its proven reliability, the “Minor” had become thoroughly outdated, kept alive only by the love that it engendered in a faithful few! Sales of the new Minis, 1100s and 1300s (all designed years later by the same Alec Issigonis!) and other cars from rival makers, notably Ford’s Cortina, had taken their toll and “Minor” production was halted. In all some 1,6 million “Minors” had been produced. Space was made for the Marina and others that followed, but somehow these never wormed their way into the affections, as did the “Minor”.

What is left today, is a large number of old Minors still running on the roads of the world, kept going by enthusiasts who have at their disposal some of the finest motoring clubs available. The cars themselves are basic and uncomplicated, therefore fairly easy to work on. The clubs have seen to it that spare parts are kept available so that these ageing cars keep going and the camaraderie amongst members of the clubs is something to be marvelled at! 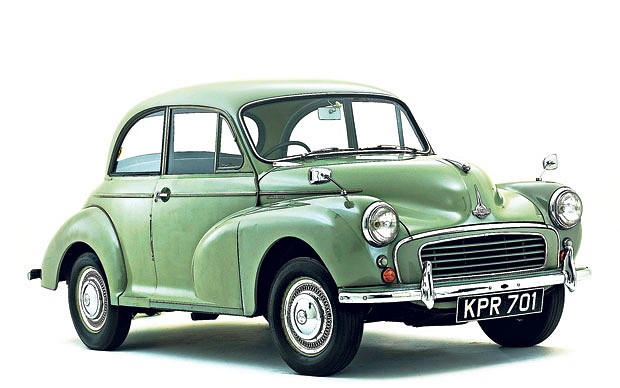 We may not be around in 74 years time, but the cars are sure still to be!

For a really impressive sketch drawing of the Morris Minor’s first 50 years,